Salomon Ambassadors Grant Guise, Matt Bixley and I arrived to the Camphouse snuggled into the bush line almost 1000 metres up Mount Taranaki. After the Taranaki Land Wars in the 1860’s, when it was used as military barracks in New Plymouth, the building was sledged to North Egmont in 1891 for use as accommodation. The Camphouse was restored and upgraded in 1999. Most of the historic features such as hand wrought corrugated iron with gun shots and tongue and groove timber panelling are still visible. It is the oldest surviving building in anyNew Zealand national park and was a perfect place to call ‘home’ for our weekend of record attempts.

With Paul Petch from Outdoor Photography http://www.outdoorphotography.co.nz/ here to capture the moments of emotion, friendship, fun, pain, self challenge and success we set off on a reci of the surrounding trails. A chance for us all to get a taste and feel for the colours, terrain, and wildness of the mountain.

The weather conditions were clear and crisp early Saturday morning and we said goodbye to Paul, off for the summit at 4am. At 6:30am Matt and I set off. Matt initially with the aim of setting the 2 and breaking the 4 summit records (with stood at 16:05hr set in 1976 by Ian McAlpine) and then depending on weather conditions carrying on for 24hrs to see how many summits he could claim. I was going for the 1 ascent and the round trip record (which stood at 2.45hr set in 1993 by Ingrid Perols). 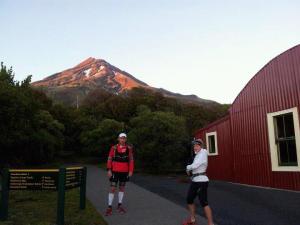 Initially the mountain was peaceful. Standing at the base and looking at the obvious summit my heart beat in excitement. Before long it was beating in the red zone. This is where it would stay while I scrambled my way up the pumice scree, over the black iced rock, into the stormy, majestical snow crater and up to the summit at 2518m above sea level. This mountain had demanded my respect, I had felt it in my chest, had heard it calling in my ears, I summited with pride, with admiration, with a huge sense of freedom in 1:29hrs. At that point nothing in the world nothing could make me happier. I screamed in joy, I ran around in circles of bliss and then remembered I had to go back down. 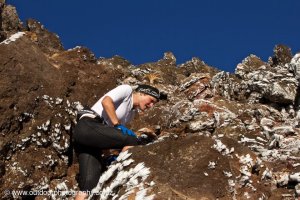 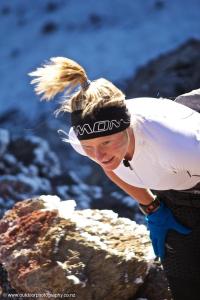 So off I went flying down the scree…totally out of control, with squeals of excitement and exhilaration. Tearing past Paul and Matt with a shared love and laughter for what we were experiencing together. I reached the bottom with a smile from ear to ear in 2.16hrs.

See a full detailed report of my route and split times for the ascent/descent here: https://frostysfootsteps.wordpress.com/2012/01/31/new-taranaki-ascent-and-ascentdecent-records/

Matt came in on his first round trip just behind me for a quick refuel and set off on his second summit. And fortunately for Matt by then there were another 200+ people on open Guided Tours, giving him huge support and in absolute awe for the rest of the day. 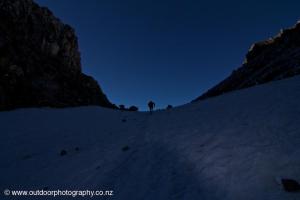 Summit3 was mentally a tough one, with weather conditions deteriorating and the fatigue of 9hrs really setting in. A fry up before summit 4 and the decision to call it a day after the 4th summit Matt found some hidden energy and set off up a different route for the last time. 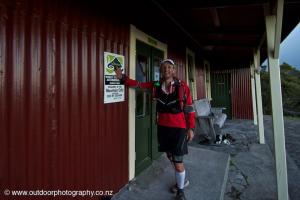 See his detailed report at: http://runlongergeek.wordpress.com/

Grant’s passion and inspiration for this personal challenge was really the driving force of our trip to Taranaki. 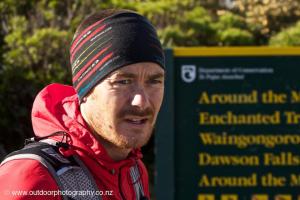 The Round the Mountain circuit record was 5:17hours set in 1992 by Greg Barbour (who still holds the Ascent and Ascent/Descent records). Unfortunately since then there has been landslides and therefore closed and re-routed tracks. This has added on what is believed to be an extra hour. There are many options as to where to start, which route to take and what direction to go. 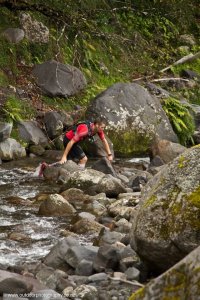 Through Grant’s research we decided to set out from Stratford Plateau and head clockwise to chase Greg old course time. Grant set a blistering pace into the ugly weather and even took some time to enjoy the views and record his progress. He set an incredibly fast new record time of 6.08hours. 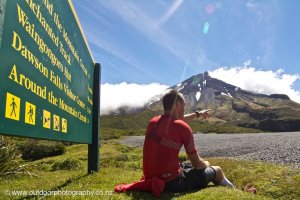 See his detailed report at: http://skirunner.wordpress.com/

With no previous female attempt of the Round the Mountain circuit I decided to set a bench mark. Mentally I broke at about 2 hours into the run. In the ugly weather I felt incredibly vulnerable on this wild and unknown mountain on my own. There were landslides, bluffs, technical trail and rock cliffs that I was frustratingly slowly tackling, and had made the decision to stop at Kahui Track – the refuel station 20kms in. As I arrived there in 4hours…yes 4hours…and in an incredibly bad mood…I was also faced with a banana, a peanut butter and jam sandwich and Matt and Paul, who were not going to hear my sob story and set me on my way.

From there it was a lot more runnable and I finally found some freedom in my steps.

Finally after 6.18hrs the sun rays came out to warm me up as well as the clouds clearing to give me some inspirational views of the magnificent mountain. 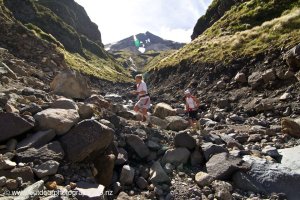 Feeling really drained and exhausted I reached the finish in a new record time of 7.41hours. 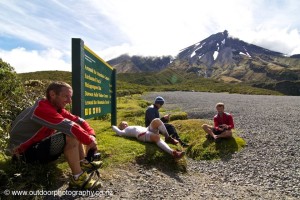 We had an amazing weekend full of success and fun doing something that we are all passionate about, and Thanks to the Taranaki people…what they are passionate about too.

See a cool video here of my summit record attempt! Warning…you may get sea sick from watching this! http://vimeo.com/37783617